Brought to you by Marvin.

Sometimes the smallest spaces offer the biggest opportunities. When it comes to windows and doors, you can get creative with large expanses of glass and clear sightlines to make rooms appear much larger than they are. Patio doors also offer a benefit to small spaces, adding valuable square footage as well as direct connection to the outdoors. These six projects demonstrate that with thoughtful window and door placement, even the smallest spaces can feel open, airy, and not the least bit cramped.

OPEN THE SPACE FROM THE SIDES AND ABOVE

The 2020 House Beautiful Whole Home included this WeShed, an accessory dwelling unit (ADU), on the property that could serve as a cozy retreat from the everyday routine. Part hangout space, part covered patio, window placement was paramount to the design, intended to boost overall mood and influence positivity in the small space.

Marvin Skycove was a natural fit for The WeShed. Its glass structure projects out into the open air—literally adding square footage—and offers additional seating with gorgeous panoramic views of the surrounding Colorado landscape. It’s the perfect spot to unplug and recharge with a cup of coffee or a glass of wine.  Every square foot in this ADU is efficient. The abundance of windows, from the Marvin Awaken Skylight above the kitchenette to the Elevate Sliding Patio Door, creatively break down barriers between indoors and out.

WINDOWS IN MULTIPLES TO FLOOD A SPACE WITH LIGHT

With an 18-foot-wide-by-130-foot-long lot, this modern railroad-style home in New Orleans demanded a thoughtfully designed space. It was designed by the home’s owners—the husband-and-wife team behind Farouki Farouki, an architecture and interior design practice—who took on the challenge of maximizing the narrow-but-deep home to perfectly suit their family of four.

On the second floor, which feels like a treehouse thanks to an abundance of windows and greenery, you find the kitchen to your right and the light-filled living room to your left. The living room features built-in white-oak millwork shelves, filled with plants and trailing leaves. Numerous windows amplify access to natural light and make the space feel larger than it really is.

“Upstairs, there are windows on almost all sides,” Sabri Farouki said. This was intentional, as the family knew they’d be spending most of their time on this floor. “We wanted to have as many windows as we could to open it up, and it feels really good. It doesn’t feel as skinny as it is, and that’s the feedback we get when people visit. The windows definitely play a big part of that.” 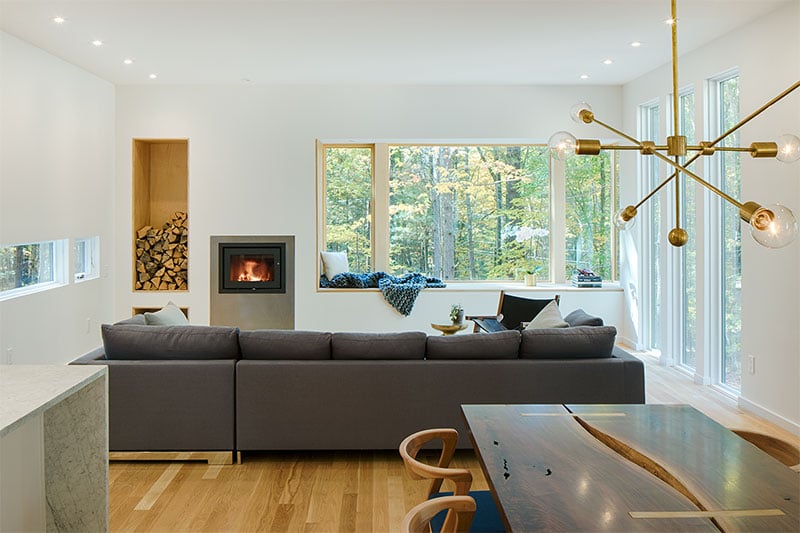 GET CREATIVE WITH WINDOW PLACEMENT

This home in New York’s Hudson Valley serves as an escape and creative sanctuary. The south-facing facade, where the sun sets in the evening, is the couple’s favorite spot on the 10-acre property. Creating expansive openings with this exposure allowed an intimate connection with the wooded landscape. 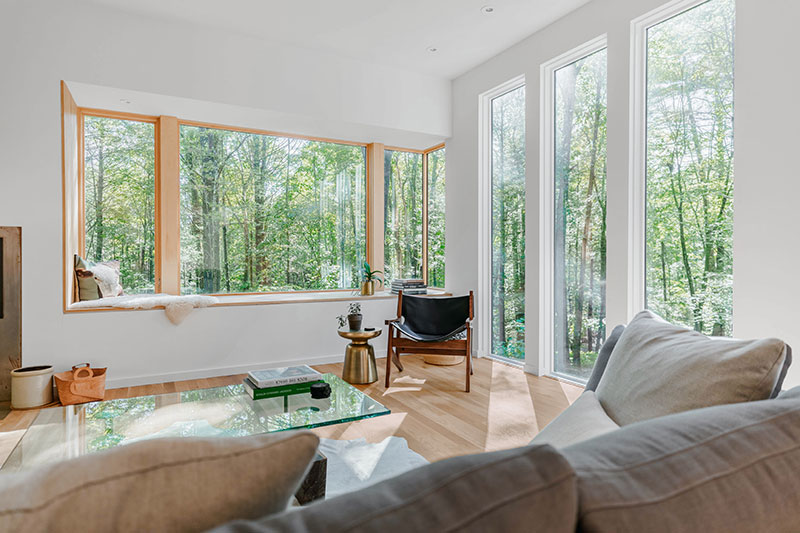 The project required a diverse portfolio of specialized windows. At the front of the home, for example, the team chose small horizontal windows to selectively frame views instead of having large openings exaggerating the less-than-stellar driveway vantage point. On the other side of the room, a window bench sits below an impressive corner window assembly, making the barrier between outside and inside disappear. Floor to near-ceiling windows adjacent to the window nook, allow light to flow into the space. 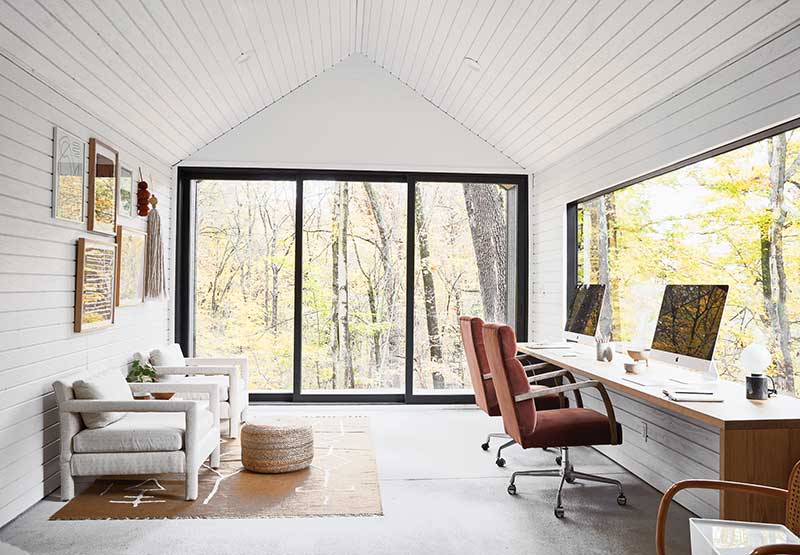 Photo by Sang An for Domino

USE SCENIC DOORS TO OPEN SMALL SPACES TO THE OUTDOORS

Sarah Sherman Samuel’s home office boasts clean lines and a minimal color palette, letting rich textures, natural light, and nature views take center stage. As a designer she has a knack for choosing art and creating beautiful moments in a space. In her home office she did it with the windows. Samuel strategically placed solid walls where the views were not so desirable and placed windows and doors in such a way that when she’s in her office she sees nothing but forest views and the wooded ravine below.

Natural light is the number-one necessity for Samuel’s productivity and a Marvin Modern Multi-Slide door harnesses abundant natural light. Adjacent to the door is a large Modern Direct Glaze window, allowing Samuel to feel immersed in nature, even while she’s at her computer.

DON’T BE SHY WITH WINDOW PLACEMENT

Atop a meadow with a clear view of Camel’s Hump peak in Vermont, this 430-square-foot micro house doesn’t feel small at all. Rather than build a home driven by its diminutive size alone, architect Elizabeth Herrmann sought to design a residence with all the spatial variety and interest of a much larger home.

Due to the home’s small footprint, window size and placement played an important role in opening up the plan and giving each space its own distinct identity. A variety of window shapes, sizes, and types were utilized throughout to respond to both function and views.

Vertically oriented casementwindows and horizontally oriented awning windows change in size and focus to respond to the surrounding landscape, framing views. A long, narrow window catches the ridgeline of the mountains. Square awning windows in the kitchen allow for beautiful natural light, incredible views and invite in the fresh air. At the heart of the house, a large picture window frames breathtaking views of Camel’s Hump. This deliberate approach provides each room with a unique vantage and connection to the outdoors, while giving the floor plan definition and a sense of place.

This home in Chatanooga, Tennessee features nine Marvin Essential windows on the living room wall alone, plus two on an adjacent wall and a door across, which features a large pane of glass to maximize natural light streaming into the space. The first floor is long and narrow, but the abundance of glass makes it feel quite spacious and offers beautiful views of the surrounding landscape. The tall ceiling in the living room and clever window placement makes the room feel even larger than it is.

This article originally appeared on the Inspired by Marvin blog.